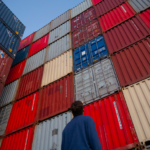 If the corona crisis has highlighted one issue, it is the vulnerability of the international production chain. Many companies in the Dutch manufacturing industry depend on overseas suppliers, and those supplies faltered during the successive lockdowns. Consequently, Dutch companies in the manufacturing industry are now moving their production back home: from offshoring to reshoring.

Disruption of the supply chain

For a long time, offshoring was the trend: moving production operations to low-wage countries. But during the lockdowns in Asia, many companies lost revenue, when one Chinese factory was simply unable to deliver a crucial part. Research commissioned by the Brabant Development Agency (BOM = Brabantse Ontwikkelingsmaatschappij) among more than 70 international companies in the province of Brabant, indicates that more and more companies have decided to return some of their production to Europe. This way, they are trying to minimize the risks and prevent disruption to the production supply chain.

Dutch manufacturing industries relocating their production operations back to the Netherlands, also called reshoring, had already become a trend. This was due to increasing geopolitical tensions, sanctions and trade wars, says Eelko Brinkhoff, Director of Foreign Investment & International Trade at the BOM. The corona crisis has accelerated this trend. Moreover, digitization and robotization are once again making Europe an attractive alternative. The Chamber of Commerce also sees an increase in reshoring in the Dutch manufacturing industry. Outsourcing to low-wage countries was mainly a cost-saving issue, but labour costs are now also rising in China. In addition, transport costs are rising, and there are numerous other hidden costs.

The market is changing. As a result of rapid innovation processes, new demands are being made on production methods. For example, customers are more often requesting customization, high-quality and shorter delivery times. In short, production in low-wage countries is no longer as attractive as it once was for many companies. And it can even result in greater complexities than production in the Netherlands. Consider also the consequences of language and cultural differences and the difficulty of protecting intellectual property. The corona crisis has shown that outsourcing production operations to other countries can make companies vulnerable. Reshoring production operations creates new opportunities for the Netherlands and the North Brabant region, according to the Chamber of Commerce.

This article is an adaptation of the news items on the Dutch websites of BNR Nieuwsradio, Chamber of Commerce and NOS.nl